The Last Night Document: Instructions for the September 11 Attack

On September 28, 2001 the FBI announced the recovery of important evidence relating to the 9/11 terrorist attacks.  They released photos of a four-page document, handwritten in Arabic, identical copies of which were recovered among the hijackers’ belongings in Boston, in Washington, DC, and at the Flight 93 crash site in Western Pennsylvania.

I wanted to take this opportunity to provide some details and context to reports of a letter that was found belonging to three of the hijackers. Copies of this letter in its original language will be provided. A four-page, hand-written letter was found in the suitcase of Mohamed Atta, one of the hijackers on American Airlines Flight 11. You may recall there was a suitcase that did not make it to the plane and was recovered by the FBI in Boston. A second copy of the letter was also found at Dulles Airport in a vehicle that was used by Nawaf al Haznawi, one of the hijackers on American Airlines Flight 77.

Additionally, a third copy of the letter was found at the crash site of United Airlines Flight 93 in Pennsylvania. These three documents, this letter, is clear evidence linking the hijackers on the three separate flights on September 11th.

Let me make clear that while this letter contains a number of religious references, I do not believe it to be representative of Muslims or the Islamic faith.

The letter is a stark reminder of how these hijackers grossly perverted the Islamic faith to justify their terrorist acts.

Media reports from the press conference referred to the document as “The Last Night,” the words that appear as a title on page 1.  Because the FBI did not immediately provide a translation of the document, various media sources had the letter translated to appear with their reports published on September 28-October 1, 2001.  Therefore, a number of different translations of the document have circulated.

Five years after its discovery, the copy of the document that was recovered from al Haznawi’s car at Logan airport and an English-language translation prepared by the FBI were entered as evidence in the 2006 sentencing trial of Zacarias Moussaoui.

“The Last Night” document exhibited at Flight 93 National Memorial is a photographic reproduction of the one recovered from Zone A, the crater, at the Flight 93 crash site.  It appears to differ from the other versions only in its condition. 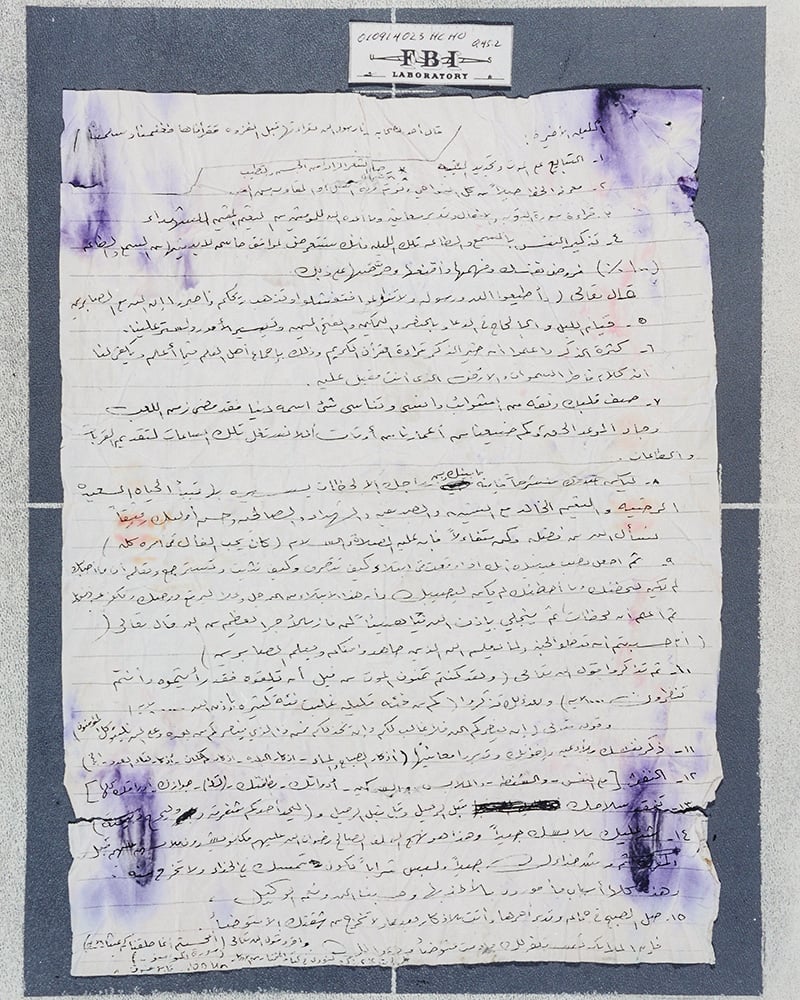 Page 1 of the The Last Night Document
recovered at the Flight 93 crash site.

Scholars studying the original Arabic language document have viewed it as a practical and spiritual guide for preparing for and carrying out the attack, with instructions for three stages:  Part 1 – how to prepare, both physically and spiritually, throughout the night before; Part 2 – what to do during the period between leaving their rooms on the morning of September 11 and boarding the aircraft; and Part 3 – what to do while inside the aircraft.

While some of the more familiar passages of this document, i.e. "Shave the extra body hair and wear cologne” and “tighten your shoes well and put on tight socks so that they would not come out of the shoes," are matters of practical advice, most of the document relates to spiritual preparation.  The hijackers are instructed to pray specific prayers at certain times and places and to read and reflect on specific passages from the Koran.  University of Chicago scholar Bruce Lincoln, in his 2003 book, Holy Terrors, notes that “God himself is mentioned a full 89 times and appears in more than three-quarters of the document’s paragraphs (30 out of 38).”

Lincoln also points out 25 mentions of the Prophet and the first generation of Muslims and discussion of these topics:  “purification (5 times), martyrdom (5 times), the need to struggle against infidels (11 times), and the promise of heavenly reward (6 times).”  Admonitions to pray are also a central theme of the document.  The hijackers are reminded to “remember God constantly” and offer specific prayers every time they enter a new place.

German scholars Hans G. Kippenberg and Tilman Seidensticker call “The Last Night” a document of “extraordinary historic importance,” and refer to it as “A Spiritual Manual” in their published work, The 9/11 Handbook.  Their analysis also points out the “enormous role assigned to the recitation of prayers,” and describes the three phases of instructions for the attack.  The first is for the night before, when the terrorists are to “attain a state of purity” by using Koranic recitals, prayers, meditations, and purifications.   During the second stage, at the airport, Kippenberg says the document directs the terrorists in “overcoming the fear of the satanic power of western civilization.”  The third stage of the spiritual manual provides guidance for actions inside the aircraft relating to “attacking the infidels and the gift of martyrdom.”

Some early reports cited Flight 11 hijacker-pilot Mohamed Atta as the author of “The Last Night” document since it was found in his luggage.  Later, however, as samples of Atta’s handwriting were discovered, they did not match that of the recovered document.  Investigative reporter for the Los Angeles Times Terry McDermott, in his 2005 book, Perfect Soldiers:  the Hijackers:  Who They Were, Why They Did It, states his belief that this “handwritten set of instructions, admonitions, suggestions, and encouragements” was written by Abdul Aziz al-Omari, one of the other hijackers who died with Atta on Flight 11.  McDermott’s information source is the Yosri Fouda interview with 9/11 co-conspirator Ramzi Binalshibh described in his 2003 book, Masterminds of Terror:  The Truth Behind the Most Devastating Terrorist Attack the World Has Ever Seen.  Fouda writes that Binalshiebh had a copy of “The Last Night” among his “souvenirs,” and told Fouda that it was written by al-Omari.  According to Fouda, al-Omari, though one of the youngest of the hijackers, “was recognized by the rest as having an exceptional knowledge of Islam – and a neat hand.”

Kippenberg and Seidensticker conclude that the Spiritual Manual, which at least three of the 9/11 hijackers carried with them as they prepared for their mission, “achieved its purpose in preparing and motivating nineteen young men to undertake four suicide missions.”  The document and its implications are certain worthy of examination for the insight that can be gained into the minds and motives of these terrorists.