Hilltop with a History 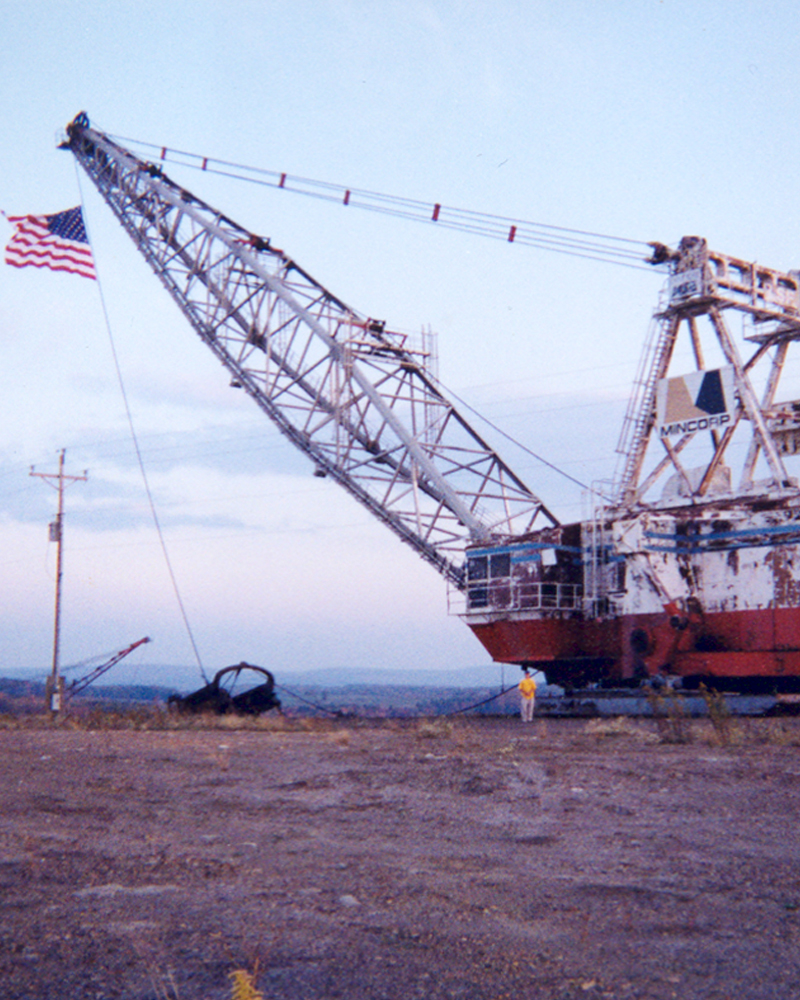 In 2001, numerous pieces of mining equipment littered the Diamond T site in Stonycreek Township where bituminous coal had been mined for more than thirty years. Two huge “draglines,” the machines which once removed the rocky soil and overburden to reveal the coal seams below, remained on the hilltop where they were last used in 1995. Since the mining company had no immediate use for the draglines, there were no plans to remove them. The aging equipment, visible for miles, was a landmark on the vast 1,000-acre grassland dotted with treatment ponds and small tree seedlings.

On September 11, 2001, these fields became linked to a watershed moment in American history. When hijacked United Airlines Flight 93 crashed at this site, these common fields became a field of honor forever.

Hundreds of Pennsylvania State Troopers, along with representatives from more than 70 other local, state, and federal agencies responded to the crash site to provide security and begin investigating this crime scene. Troopers were sent to the dragline hill , the highest point overlooking the crash site, to ensure than no one illegally entered the secured perimeter. The Pennsylvania State Police kept vigil there for the 13 days of the investigation.

On their second day at the site, one of the troopers brought a US flag along to his post on the dragline hill. He attached the flag to a pole, and climbed to the top of the larger dragline’s 200’ long boom to attach the pole, intending to inspire those who worked at the crash site below, and show his support for the United States of America in this time of national crisis.

Several days later an employee of the coal company that owned the dragline donned climbing harness and climbed to the top of the boom to attach a much larger flag that could be seen for miles. With the help of volunteers and the local Congressman, a US flag measuring 10’ x 15’ flew from the top of the dragline from 2001 through 2008, a symbol of a nation’s honor for the actions of the passengers and crew of Flight 93.

While plans progressed for constructing a permanent Flight 93 Memorial, the condition of the draglines on the hilltop continued to deteriorate. Fencing was installed to deter curious visitors from climbing on the structures. Nonetheless, thieves cut locks on the fences and stole copper wiring from the equipment. After a feasibility study which included an estimate of the costs to stabilize and secure the draglines over time, and an analysis of their connection with the Flight 93 story, the National Park Service reached the decision to dismantle both draglines and sell them. In 2008, the Marion 7500 was dismantled and removed from the site in pieces. Before they left the site for the final time, the dragline salvage crew brought two links from the bucket’s massive chain to the temporary Flight 93 memorial on Skyline Road, as a tribute to the passengers and crew.

One piece of the dragline, its 22-ton bucket, was retained for a special purpose. It was transported to a foundry in Newport News, VA to be melted and incorporated into the bow stem of the USS Somerset, one of three new amphibious transport ships being built by the U.S. Navy named for the 9/11 attack sites. After its commissioning in Philadelphia on March 1, 2014, the Somerset sailed to its home port in San Diego, CA. A small piece of the Marion 7500 from the Diamond T mine now cuts through the Pacific Ocean, a reminder of the courageous passengers and crew of Flight 93.

The National Park Service hopes to construct a trail from the return road at Flight 93 National Memorial to the hilltop where the dragline once stood. Those who walk the trail will learn more about the history of this site, and find a panoramic view of the Western Pennsylvania hills and fields touched by Flight 93 and the events of September 11, 2001.