Many residents of Southwestern Pennsylvania saw a low-flying 757 pass over their homes and businesses on the morning of September 11. Some even called their local 911 center to report the plane's erratic motions, and their fears that the plane was about to crash. After the shocking crash of Flight 93 many of these "witnesses to history" recorded their experience as part of the Flight 93 National Memorial Oral History Project. Click on alphabet letters A-H on the flight path map below to hear their stories. 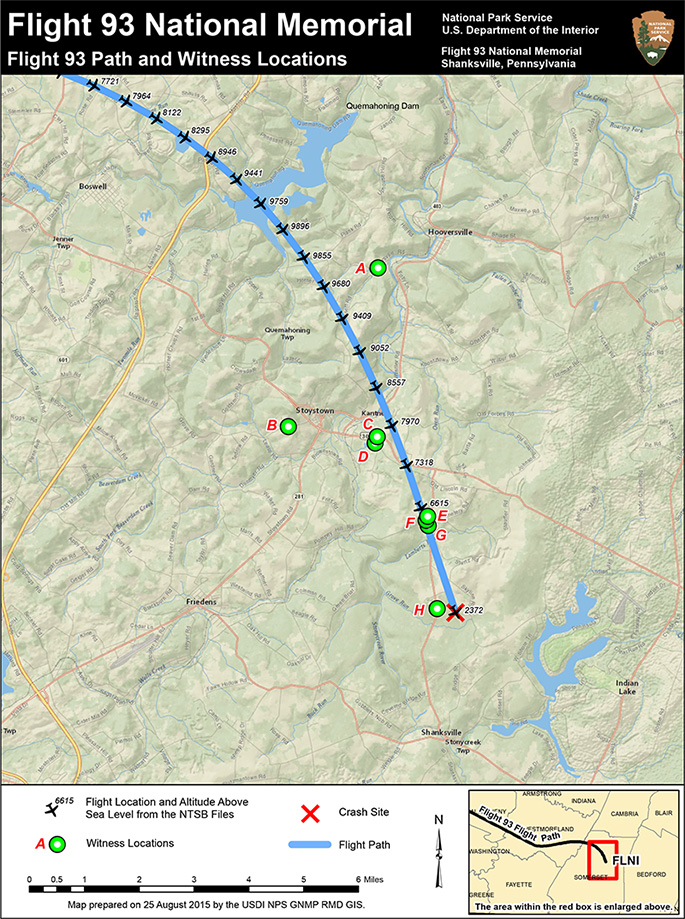 Robyn Blanset and her father, Ray Stevens, were at work on the roof of the Blanset farm house near the Quemahoning Dam in Somerset County on the morning of September 11, 2001. Blanset’s toddler daughter was secured in her stroller on the ground, playing with the family cat, while her mother and grandfather climbed up and down to finish their work on the roof. The three generations were unaware of the attacks in New York and Arlington. When they heard, then saw Flight 93 overhead, they reacted to the rare opportunity to view a commercial aircraft at low altitude on a clear, late summer day.

While hanging clothes out to dry at her home near Stoystown, Pennsylvania, Linda Shepley watched the final moments of Flight 93 as it descended on September 11, 2001. Aware of the events at the World Trade Center and Pentagon, as well as the FAA’s order that all planes land, she initially thought the pilot was searching for an airport where he could safely bring down his plane, then wondered if there was a mechanical problem with the aircraft causing its erratic flight.

Doug Miller, a local truck driver, became aware of the events at the World Trade Center and the Pentagon as he listened to his FM radio while hauling coal on the morning of September 11, 2001. A few minutes after 10 o’clock, while driving east on Route 30, Miller had the shocking experience of seeing a large plane - Flight 93 - rapidly descend and crash. In an effort to assist at the crash site, Miller left his planned route, turned onto the Lambertsville Road, and drove his tri-axle into a familiar location, the former the Diamond T mine.

X
It shook the ground

From the salvage yard of Stoystown Auto Wreckers on US Route 30, Terry Butler saw Flight 93 as it flew over the highway and before it disappeared behind a forested ridge and crashed. The sight caused the burly yard worker to collapse as the ground beneath his feet shook from the plane’s impact. Aware of the fact that two planes had already crashed into the World Trade Center and a third plane had hit the Pentagon, he alerted office personnel to call 911 to report the crash of a large plane.

X
One of the last

Eric Peterson, at work in his garage overlooking the village of Lambertsville on the morning of September 11, 2001, spotted Flight 93. He followed the plane’s low and erratic flight over Lambertsville, uncertain if the plane might crash there. The plane disappeared from his view and seconds later, he witnessed the explosion from its impact. He immediately drove to the crash site less than two miles away to assist in the search for survivors, completely unaware of the attacks in New York and Arlington.

While visiting with her sister on her porch, Viola Saylor heard a deafening noise as Flight 93 approached on the morning of September 11, 2001. The women saw the plane above the treetops and watched in disbelief as the plane screamed across the sky over the Saylor home in the village of Lambertsville.

Anita McBride Miller was at home in the village of Lambertsville, intently watching breaking news from New York on the morning of September 11, 2001, when she heard an "absolutely unbearable, horrific noise." Miller ran to a large window facing south and watched Flight 93 fly directly over her home, then called 911 and told the dispatcher, "I believe a plane crashed in my backyard."

On September 11, Paula Pluta was at home near Lambertsville, watching morning television, but unaware of the breaking news in New York and Arlington. She glanced at the clock, then heard and felt the approach of a low-flying aircraft. From her front porch, she watched the plane in its final descent, but a tree line hid its impact from her view. She frantically called 911, then drove her car less than half a mile to the crash site.