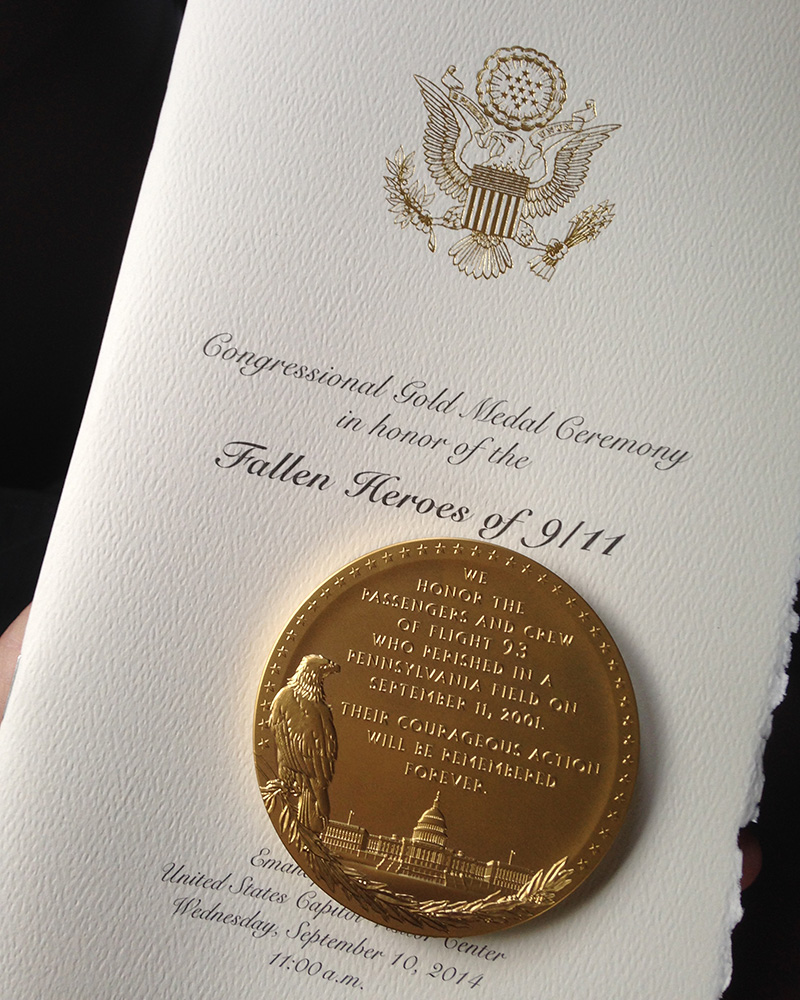 George Washington was awarded the first in 1776.  The Wright Brothers, Thomas Edison, Jonas Salk, Robert Frost, Elie Wiesel, Rosa Parks, the Navajo Code Talkers and the Tuskegee Airmen are among those who have been honored with a Congressional Gold Medal since.  In 2011 the United States Congress approved the “Fallen Heroes of 9/11 Act” which added “the men and women who perished as a result of the terrorist attacks on the United States on September 11, 2001” to the distinguished list of recipients of the nation’s highest civilian award.

Regarding Flight 93, Congress found that “the passengers and crew of United Airlines Flight 93, recognizing the imminent danger that the aircraft that they were aboard posed to large numbers of innocent men, women and children, American institutions, and the symbols of American democracy, took heroic and noble action to ensure that the aircraft could not be used as a weapon.”

The obverse of the Flight 93 Congressional Gold Medal features the Pennsylvania field where Flight 93 crashed, including the towering hemlock groves beyond the sandstone boulder that marks the crash site at Flight 93 National Memorial.  The Medal bears the inscription: A COMMON FIELD ONE DAY, A FIELD OF HONOR FOREVER, ACT OF CONGRESS 2011.

The reverse of the Flight 93 Congressional Gold Medal has 40 stars, one for each passenger and crew member, on a raised edge.  The design features the US Capitol with a sentinel eagle clasping a branch of laurel.  The Medal inscription reads: WE HONOR THE PASSENGERS AND CREW OF FLIGHT 93 WHO PERISHED IN A PENNSYLVANIA FIELD ON SEPTEMBER 11, 2001.  THEIR COURAGEOUS ACTION WILL BE REMEMBERED FOREVER.

Bronze versions of these Medals have been struck and are available for sale by the US Mint.  The sale of these Medals assists in recovery of the cost of producing the three Congressional Gold Medals.