Before the National Park Service was even established, there were citizens who fought to protect the nation's historical and cultural treasures. These citizens created formal partnerships with the National Park Service as years passed, creating awareness and appreciation for these special places and providing educational and interpretive resources to enhance the experience for every visitor. These groups, appropriately, are called "Friends."

In 2002, federal legislation was passed to create Flight 93 National Memorial and the National Park Service began planning for long-term care and memorialization of the site. Through an international design competition, the National Park Service selected a design for Flight 93 National Memorial. The first elements of the permanent memorial opened in September 2011 with an entrance on U.S. Route 30 leading to the Memorial Plaza and the Wall of Names. The second phase of the Memorial is the Visitor Center, Learning Center, and allée walkway scheduled to open in September 2015. The final element of the Memorial's design, the Tower of Voices, is in the design phase.

Whether you live near or far, you can join the Friends of Flight 93 and support our mission. 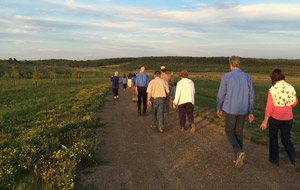