September 11, 2001 began as an ordinary, late-summer day. As the sun rose, fair weather and blue skies prevailed over much of the country and thousands of commercial airliners prepared for flight. But, in less than two hours' time, this seemingly routine day was transformed when 19 terrorists boarded and hijacked four commercial airplanes to attack America.

Nearly 3,000 people were killed when the hijacked planes were flown into the World Trade Center in New York City, the Pentagon near Washington, DC, and when United Airlines Flight 93 crashed in the Pennsylvania countryside outside of Shanksville, PA.

Flight 93 did not arrive at the hijackers' intended target - the Nation's Capital - because of the selfless and courageous actions of the 40 passenger and crew members on board. When Flight 93 was hijacked, the passengers and crew members used airfones on the plane to contact the authorities and their loved ones.

A total of 13 passengers made 37 phone calls. Through their phone conversations, they learned of the first two attacks, and subsequently took quick action. Pushed to the back of the plane by hijackers, the passengers and crew took a vote – and decided to fight back to try and regain control of their airplane. As a result of phone calls made from on board Flight 93 and from the cockpit voice recorder recovered at the crash site, we learn of the struggle the passengers and crew members had with their hijackers which began in the skies over Western Pennsylvania, and ended with the high-speed crash of the plane in a reclaimed strip mine near Shanksville, just 18 minutes flying time from Washington, DC. Countless lives were spared thanks to their heroic actions, but all on board Flight 93 were lost.

A common field was transformed into a field of honor.

On September 24, 2002, Congress unanimously passed the Flight 93 National Memorial Act (P.L. 107-226). The Act "Established a Memorial at the September 11, 2001, crash site of United Airlines Flight 93 in Stonycreek Township, Somerset County, Pennsylvania, designating the final resting place to honor the passengers and crew of Flight 93." The Act also designated the National Memorial as a unit of the National Park system.

The design for Flight 93 National Memorial was chosen from more than 1,000 entries in an international competition that included submissions from 48 states in this country and 27 countries. The memorial provides a series of visitor experiences beginning with a three-mile journey through a landscape that still hints at its mining past, leading visitors to an overlook located on the Flight Path, along with a Visitor Center and Learning Center down to the crash site. The winning design was awarded to Paul Murdoch Architects of Los Angeles, CA with Nelson Byrd Woltz of Charlottesville, VA in 2005.

The memorial features were dedicated in three phases. In 2011, the Wall of Names was dedicated which features the names of the 40 passengers and crew members inscribed on a wall of polished white marble panels erected along the Flight Path. The Memorial Plaza is the quarter-mile northern-boundary to the crash site, which is the final resting place of the passengers and crew members, leading to the Wall of Names. In 2015, the Flight 93 National Memorial Visitor Center and Learning Center opened, providing an even deeper level of information about this seminal day in history through engaging exhibits and educational programming. In 2018, the 93-foot-tall Tower of Voices was dedicated marking the final phase of construction and completion of the permanent memorial. In 2020, the final 40 chimes were hung and dedicated in the tower as a tribute in sound to forever commemorate the voices of the 40 heroes.

Flight 93 National Memorial is a place to be inspired by the courageous actions of the 40 passengers and crew members of Flight 93, and a place of peaceful reflection. The living memorial landscape is a tribute to the resilience of the passenger and crew members that will forever honor their actions on 9/11.

To Plan Your Visit and learn more about the memorial’s features, visit https://www.flight93friends.org/plan-your-visit/overview.

The Friends of Flight 93 National Memorial is dedicated to educating future generations about the Flight 93 story, maintaining the highest standards of care for the memorial, and providing meaningful experiences for its visitors.

Learn more about the Friends of Flight 93 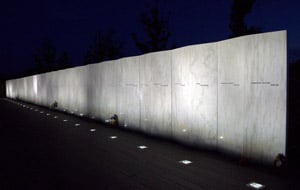 Remembering the passengers and crew members of Flight 93.

A Gift That Will Last

A gift today will ensure that Flight 93 National Memorial remains accessible, relevant and inspirational to present and future generations.