THANKS TO OUR VOLUNTEERS, WE HAVE SUCCESSFULLY PLANTED 129,918 TREES SEEDLINGS AT FLIGHT 93 NATIONAL MEMORIAL! THE GOAL IS TO REACH 150,000 PLANTED SEEDLINGS OVER 10 YEARS THAT WILL GROW TO CREATE A WINDBREAK FOR THE 40 MEMORIAL GROVES, IMPROVE WILDLIFE HABITATS, AND RESTORE THE LAND TO ITS NATURAL, PRE-MINING APPEARANCE.

This year marks the 9th consecutive year of tree planting at Flight 93 National Memorial. The Friends of Flight 93, National Park Service and National Park Foundation partner with local sponsors and forestry professionals to host the reforestation project. We look forward to this year's planting taking us one step closer to our goal of planting 150,000 new seedlings across Flight 93 by 2021!

Registration for the 2020 planting will open in March. You can find more information on registration, becoming a sponsor and more event details on this page.

The Flight 93 Speaker Series is hosted by the Friends of Flight 93. The summer-long series is free of charge to the general public. Programs are presented once a month on Saturday's at noon & 2:00 pm, and Sundays at noon only in the Flight 93 National Memorial Learning Center.

May 2019 – Family members' Ken Nacke and Patrick White who shared stories about Ken’s brother and Patrick's cousin, Louis J. “Joey” Nacke, was a passenger on Flight 93 on September 11, 2001.

June 2019 – Family members' Ed Root and Emily Schenkel shared stories on their loved one, United Airlines flight attendant Lorraine Bay, and their experiences at Flight 93 National Memorial over the past 18 years.

July 2019 – Volunteers-in-Parks who shared their unique stories on volunteering at the memorial, and their connections to Flight 93 National Memorial as Ambassadors; and

August 2019 – Paul McNulty, President of Grove City College who served as the lead prosecutor in the Zacarias Moussaoui trial, and eventually went on to serve as deputy attorney general under George W. Bush.

May 2018 – Dennis Dirkmaat, Chair of Applied Forensic Services at Mercyhurst University & worked on site at Flight 93 in September 2001 and Wally Miller, Somerset County coroner, who oversaw the crash site and helped family members organize the 'Families of Flight 93.'

June 2018 – Family member Lorne Lyles, whose wife, CeeCee, was a flight attendant on Flight 93, will be speaking at the memorial for the first time. Lorne received a call from CeeCee in the flight's final minutes as she informed him that passengers and crew were breaking into the cockpit to attack the hijackers.

July 2018 – Tim Lambert, who owned land at crash site, and Dennis Roddy, who covered the Flight 93 story for the Pittsburgh Post-Gazette, will give their unique perspectives on the event and its aftermath. Lambert and his family owned the hemlock trees that are such a prominent part of the memorial's story; he also is a Harrisburg-based radio reporter who reported from the site.

August 2018 – Cleveland-based air traffic controller John Werth, who was responsible for monitoring Flight 93 on September 11, and was the first person to realize that the flight had been hijacked, will be the featured speaker. He will be joined by Mal Fuller, who oversaw the air traffic control tower in nearby Pittsburgh that fateful day.

July 2017 – First responders John Weir of PBS Coal, which owned part of the crash site; Louis Veitz, unit supervisor of the Pa. State Police forensic mapping unit during the investigation; and Stacy Schmitt, one of the first state troopers to reach the site on 9/11.

The public is invited to gather in remembrance and honor of the 40 passengers and crew members of Flight 93, as well as all who gave their lives on September 11, 2001.

The annual observance will begin at 9:45 a.m. on Friday, September 11, on the Memorial Plaza. At 10:03 a.m. – the moment Flight 93 crashed – the names of the passengers and crew members will be read, the Bells of Remembrance will be rung in their memory, and a wreath will be placed at the Wall of Names. Limited seating will be available on a first-come, first-served basis.

For more information on this year’s observance, including weather updates, please visit www.nps.gov/FLNI. 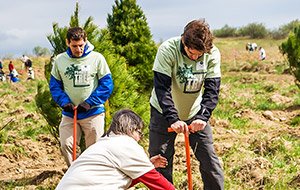